Michael E. Hoover is a founding partner of the law firm of Diefenderfer Hoover (now Diefenderfer Hoover & Wood, LLP), which was established in January, 1988, when the Pittsburgh, Pennsylvania, law firm of Sheinberg & Hoover became affiliated with the Washington, D.C. law firm of Wunder, Diefenderfer, Ryan, Cannon & Thelen.  Mr. Hoover is also a Certified Public Accountant.  Prior to attending law school, he was a staff accountant with the accounting firm of Coopers & Lybrand (now PricewaterhouseCoopers L.L.P.).  In his 44 + year legal career, Mr. Hoover has represented individuals and corporations in the fields of contract, corporate, commercial, RICO, labor & employment, government relations, software licensing, taxation, and probate law, and he has conducted litigation in State Courts in Pennsylvania and Florida, Federal Circuit and District Courts within the 3rd, 4th, 7th, and District of Columbia Circuits, and in the U.S. Tax Court.

From March, 1980, until September, 1984, Mr. Hoover was a member of the City of Pittsburgh Commission on Human Relations where he presided over administrative hearings involving alleged violations of the Pennsylvania Human Relations Act and Title VII of the Civil Rights Act of 1964, as amended, by individuals, businesses and local government departments or agencies.  He was nominated for that position by the Mayor and confirmed by the City Council of the City of Pittsburgh.  From 1984 to 1986, Mr. Hoover was an elected member of the Pennsylvania State Democratic Committee.  In 1981 and 1983 he was a candidate for the Democratic nomination for Pittsburgh City Council.  Mr. Hoover has also served on the Boards of several Allegheny County Charities. 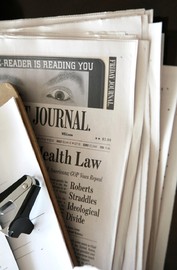